If you have not yet had the privilege of watching “Word Party” on Netflix, let me take a moment to explain the gist of the show:

There are 4 babies (that happen to be different baby animals) who hang out together, and you as the viewer are a “big kid” who helps them answer questions as they go about their day. It’s a very repetitive show and each episode they learn a few new words… thus the basis for the title: Word Party.

Isn’t it funny how sometimes you’re watching a little kid’s show, and they say something that is actually kind of profound?

This happened to me a while back. In episode 9, Lulu (the panda) decides not to take her nap, which then leads her to be not so nice to the other babies later in the day. They finally realize that her lack of sleep has made it harder for her to manage her emotions and feelings, which is when the statement: “sometimes when you’re tired, you have big feelings” was announced by the narrator. 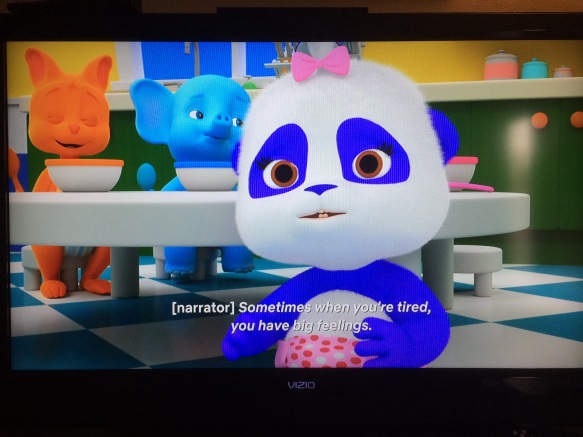 I laughed to myself when I saw this because the week before I literally had had a terrible and stressful week – one of those weeks where when it rains, it pours – and I definitely had experienced some big feelings! Things that I normally would brush off as not a big deal, became a very big deal. Things that only minorly bothered me before, became the reason I had a breakdown and cried in our kitchen after church one Sunday.

You can probably see what had happened – it was like dominoes, one thing affected another thing, and another thing, until my whole world felt like it was crashing down. Most of the time, I generally handle my anxiety pretty well. I have to be diligent to manage it, but mostly it does not take over me.

That week put me in a place where I was really struggling, but mostly it was an internal struggle, one that I felt like people couldn’t see when they looked at me. I wanted people to see and to care, but I also didn’t want to bother people.

Well, I finally bothered a few people about it. And the response was beautiful – people did care, and they did love me. My problem was not too insignificant for them, they were not too busy to listen. If you were one of those people, thank you so much – you don’t realize how much it meant.

If you’re in a downward spiral right now, I would encourage to think of one person you could reach out to. If you can’t think of anyone, send me a message and I’ll be your person. We could be complete strangers, but you should know you are still valuable and worthy of love and compassion.

I hesitated to share this post, because I don’t want to be seen as weak or like the mess that I really am sometimes. But I decided to share it after all, because my guess is I’m not the only one who has had weeks like that.

One thought on ““sometimes when you’re tired, you have big feelings””

So You’ve Decided to Try to Get Pregnant… A Saga