Here it is – July 26th. Today marks 4 years since I experienced a major case of postpartum depression and was admitted to the hospital for a week.

I reread my post from last year’s anniversary in 2019 – I really struggled with that one, a lot of feelings of grief came up for me. I guess you never really know how your body is going to heal and process trauma. One thing I do know, it takes TIME.

I’ve been excited (sort of?) for this year however because I’ve felt really positive when I’ve thought about this day arriving. I feel like maybe I’ve turned a corner – I feel like I can really embrace this part of my story and understand how it’s made me a better and stronger person. Maybe next year will be different, but I’m thankful to feel grateful and positive this year.

While I would certainly have never wished this experience on myself or anyone else, I’ve been reflecting on ways which I think it has changed me. Not just changed, but empowered.

#1. It’s made me a passionate advocate.
After going through this experience, I knew that I wanted to publicly share what had happened to me. About 3 months after my postpartum depression episode, I published my first blog post about this experience. I remember just hoping it might make a difference, that it might help at least one person not feel so alone. I’ve since been given other opportunities in different avenues to share my struggle with depression, specifically dealing with postpartum stuff, and it has been very healing (albeit difficult) for me. I try to make it a point to be very open with others in conversation about struggling with depression and anxiety and going to counseling – I want to remove the stigma of mental health any way I can.

END_OF_DOCUMENT_TOKEN_TO_BE_REPLACED

This week has been hard – I was originally thinking “awful” which is also somewhat accurate, but obviously more negative. This week was our son’s first week back at daycare in two weeks because of the Christmas break – and our son has not handled it well. Most drop offs have ended with me walking away down the hallway, still hearing his screams as I exit the building. And it hasn’t just been screaming – he’s started running away from me and hitting when he doesn’t like something – he’s even begun to hit other people now if he’s extremely upset.

My identity as a mom has been a bit shaken this week – I hate feeling like I can’t control my child (I hate not being in control of things in general…) I hate feeling like I’m the only one whose three-year-old has extreme tantrums anytime I try to leave him at daycare – those feelings of “what am I doing wrong?” begin to spring up, and I start convincing myself that everyone is judging me for being a “bad” parent.

I know my kid is a good kid, but I also know he is easily overwhelmed by people, loud noises, and changes to his routine. He used to tell me that he didn’t like daycare because “everyone said hello to him” – so I get it, he’s introverted, and that’s okay. Hitting, screaming, and throwing tantrums are not okay, however, as I have told my son numerous times this week in our heart-to-heart talks at the end of the day.

I confided in a trusted friend this week about how I was struggling with mom guilt, how I was so tired of every day being a struggle for myself and my child – and she did exactly what I needed her to do, which was to speak words of truth to me, validate my feelings, and to remind me of the lies I was telling myself. Here’s part of a text she sent me yesterday:

“That is so hard, friend. It [my son’s behavior] feels like a reflection on you because you’re the mom – but really the reflection on you is that he’s a secure boy who knows he has a voice and feels comfortable and safe to express his frustration or anxiety…”

We talked about how his “bad” behavior was not being done maliciously, but the screaming and hitting were his way of trying to communicate that he felt unsafe, or scared, and that he really, REALLY was not happy. We talked about doing things to help validate my son’s feelings – saying things like, “I know this is hard for you and that you are not happy. You are safe. I will come back this afternoon to pick you up.” She reminded me that I was not alone, as I had convinced myself, and that many other parents were also struggling this week coming back from the holiday break. She reminded me that the people who might be labeling me a “bad” mom were not the people who mattered anyway.

Something else I also had to come to terms with this week was my pride. I realized that I was allowing my pride to either be puffed up, or totally flattened, by my son’s behavior. I came across this posted on a friend’s Facebook wall, and I felt like it was meant for me to see: 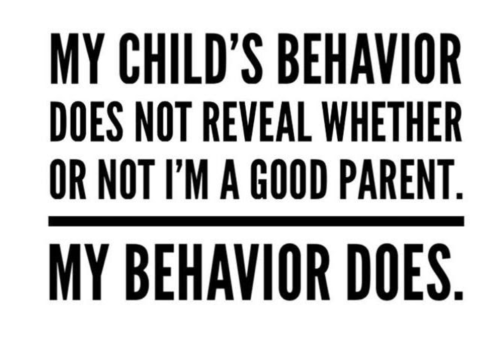 I want to be proud of my son when he does good things and when he overcomes his fears. But I don’t want to let his choices totally define me and make me feel secure or insecure about my abilities as a mother. But how often do we find ourselves thinking this way? We see a “badly” behaved kid (or sometimes more accurately, probably an emotionally overwhelmed kid) and we sometimes unfairly assume that the parents are just failing to do their job or put in the effort. Many times, as I can attest to, the parents are doing the best they can – and they’re tired and frustrated and feel helpless.

So, where do I go from here? My husband and I have tried to be creative in how we attempt to get through this phase – one thing we have tried to start doing is dropping our son off earlier than normal to daycare, when there are fewer kids in the classroom (aka. creating a less overwhelming environment). The few days we have done it, things have been better – not perfect, but better. We want to strike a balance between validating our son’s feelings, allowing him a voice to say “no,” but still requiring him to be able to function in day to day life. It’s hard, I don’t always find the right balance – but I’ll keep trying.

As always, my hope is that sharing this post will help at least one other person to not feel so alone. The author Brené Brown says that shame grows in us when we convince ourselves we’re alone and keep our struggles a secret. Shame is destroyed when we experience empathy from others – that moment when someone says “me too.” If you need another parent to say “me too,” I’m here for you.

Today is July 26. It’s my 2-year anniversary. It has been two years since I was admitted to the psych hospital for postpartum depression. I have had this segment of my story written for many months, but had not felt ready to make it public. I feel ready today.

This post focuses on the day that I was released from the hospital after being inside for a week. If you missed earlier parts of my story and want to read them, you can click on the following links below:

It had been a week – an entire week inside a psychiatric hospital. I was pretty sure today was the day I was going to get to go home, although I felt nervous. What if the doctor didn’t deem me “well” enough to leave? What if I was stuck in here forever?

It felt like a game – you had to win over the right people to get out. One being the doctor, the other being your case manager. I remember when Amy came to me that morning and told me I was going to go home. I was so excited – I was going to get out of there!

*Anthony told me I had never looked happier or smiled more than at that moment – it was probably true – I had been quite the recluse, like when I didn’t leave my bed for a few days.

I remember gathering all my things from my provided laundry basket. It wasn’t a lot – I had a few changes of clothes, a few books that I hadn’t read, my toiletries, a few pictures of Calvin that Dean had brought to me … actually it was more than most people had with them. The day I was dropped off, I had nothing except the clothes I was wearing. I was lucky – I had people to bring me more things. But not everyone in here was as lucky.

END_OF_DOCUMENT_TOKEN_TO_BE_REPLACED

So You’ve Decided to Try to Get Pregnant… A Saga